In my work, I am sometimes called on to help during a transition time for an animal.  Upcoming, we have Halloween, All Saints Day and All Souls Day, which is a time for remembering and honoring our loved ones who have crossed over. I’m going to recount one of the times I had an opportunity to help an old client with the painful grief she was feeling at having to assist her dog Jack in crossing over onto the Rainbow Bridge. I was given permission by both human and canine to write about the essence of what Jack said that day.

Jack had a difficult life. In addition to being a rescue dog who had some trouble finding one forever home (until Kathy decided she was in love and hers would be it no matter where she went) he routinely had a large range of emotions, as he called it, waves, that would wash over and often overwhelm him and everyone around him. He also had a number of physical ailments including a long battle with cancer, which complicated life.

On his last night, as his breathing slowed, and Kathy rushed him once again to the hospital. There, the vets informed her that his lungs were filling with fluid, one more phase of the sarcoma that had attacked him long ago. They made the decision to put him to sleep, unable to find a better solution, but filled with pain at having to say good bye to an old friend. Kathy called me to help her make sense of everything that had just happened. 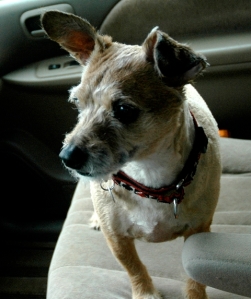 As we asked Jack for his perspective, he described what a relief it was to be released,  not only from an old body that wasn’t working properly, but especially from the lifelong waves of emotions that he’d had to ride up, down, sideways, and often just chaotically all over, all his life. What a grand relief. Such a bright happiness and contentment permeated his every word now.

He began to describe, as Kathy and I listened in rapt attention, what the Purpose of Life really is. I’ll try to reproduce it here, and please forgive me if I don’t do complete justice to these deepest of musings.

Jack said “Life is not about getting it right or achieving this status or that job, this or that title or property, these people liking you or those not liking you.

It is about the waking up each day, going to bed each night, setting a goal and then living that journey as far as it takes you. It’s that simple. Then doing it again with another goal or focus.  That that is what is important, right there, living the journey to the goal. Not whether it was the “right” goal, not how you performed or if you thought it didn’t turn out the way you had hoped it would, or the way others had predicted or you had even  prayed it would.

That there is nothing wrong with, and everything right with, picking something, anything, to focus on and seeing what that brings. If that isn’t pleasant or desirable, then picking a new goal to journey toward and immersing yourself in all the highs and lows and in-betweens as all equally valid and good and valuable. You can decide to step back and relax about it all, no problem. There is no badge to be earned for suffering, or conversely for appearing successful to the outside world and living a life seemingly free of angst. Suffering is ok to do if that is what happens. To grieve the existence of suffering as lost opportunities or grave mistakes we think we made is to miss the point. To coin a phrase “it’s all good”.  However, Jack had more to add to that thought. He was showing that we benefit from all of it that is part of it.  Immerse yourself fully in the experience, as so many dogs (and cats!) are so good at doing. Fully experiencing exactly what they are feeling at the moment. Barking lustily, staring intently at what they don’t know(or what they do know), diving into the same food they’ve eaten every day for years with gusto and enthusiasm, well you know the list is just endless. Just pick something and lean into the experience. Leaning forward into the ride toward the (whatever) goals you set. These “goals” are anything that you pick to move toward – there is no right and wrong. And even if you are thinking while you are living it ‘this is so wrong’ or ‘this is so right’,  that doesn’t really mean anything. That the greatest fun comes after all the rights and wrongs are over and you are just floating on the biggest wave of all – heaven from a dog’s eyes. The failed attempts and faux pas’ are all equally valid with the victories and accolades, neither better or worse, all good to experience and live. 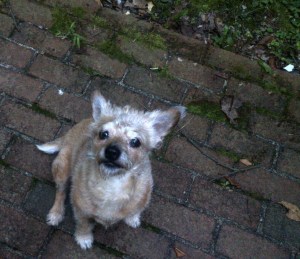 We may never really know all Jack is saying here, but just to get a taste of it, coming from one who’s life was rarely if ever easy because even when there weren’t outside pressures, he had his inside pressure cooker bubbling, well it makes it that much easier to accept. You don’t have to live a perfect life to live life perfectly. In fact its better if you don’t. 🙂

2 thoughts on “Communications with Jack the Dog”