As I prepare for my journey around the world, again, this time to Thailand to volunteer at an elephant rescue place, I reflect on why I am going.

Because it feels good to do so.

Is that such a foreign idea to most people? Is it just New Jerseyans?  I don’t think so. When I stopped at the bank yesterday to withdraw money, somehow I mentioned to the teller/manager at this tiny adjunct bank in a supermarket),that I was going to need this money because I’d had some hard knocks recently The look in her eyes changed immediately, and I suppose expecting I would sympathize, she began to tell me the long story of her life, a tale of struggles and past triumph, but always coming back to the present – now – the one where she hated her job and was completely miserable. I began to wonder why anyone would continue in a situation where they were so clearly miserable. So I asked her – “what are your choices here?” She stopped and looked at me in confusion. Why wasn’t I feeling sorry for her? Where were the pity phrases we utter automatically, condolences for her losing her vice presidential position that landed her here, in a job that paid her a quarter of what she had been making.  Didn’t I understand that she had no choice?

“We all have a choice” I found myself saying. She kept staring at me as if I was holding up the bank about to ask her to empty the safe. “If you are so miserable, why not make a change?” I said. This is particularly telling to me because I have been that woman at other times in my life, and I’m not going back. Not going to put energy into justifying my misery anymore. You can all hold me to this! As soon as I realize I’m doing it, I’m making a new choice – to what feels good now. This has been a lifelong endeavor, and so it’s particularly painful to see others still caught in the sticky grasp of  this demon.

Well, this woman was not going to give me my money until I commented on how awful her life was. I felt sorry for her, but mostly I felt repulsed about having to hear her insist she was a victim of life. Not because of her situation – I’ve been there myself too many times, but because of her disbelief in the idea that she had a choice, that she could make a new choice and create a better life- one where she loved it. In reality, the repulsion and how it bothered me after I finally left her window was from the recognition that I have made the choice to be like her at times, and how deeply painful – like self inflicted torture- it was. I reminded myself to let this serve as a cautionary tale for me, to send good wishes of change for the better her way, and to be grateful for once again returning from the dark side of pessimism to the joy of finding my bliss and leading it forward into a new life that feels good.

What really made me notice this dynamic was that this same scenario had been played out earlier at a swim class I had been a part of that morning. One of the students had monopolized the instructor’s ear with unrelated complaining chatter for most of the 45 minute class. It was my first class and I could have used more of the attention of the instructor, who granted, did an admirable job of throwing some instruction my way, in-between polite listening to this housewife brewing over storms in her teacup. Near the end of our time, I mentioned that I wouldn’t be attending soon because I would be away for awhile.

“Thailand, to volunteer at an elephant rescue facility.  I’ve always loved elephants and I’m really excited about this opportunity to be close to them and learn more about their life and their world”

The chatty woman who had spent the class intent on describing every problem in her life in detail, glared at me. “Boy I wish I could do that.” She seemed more angry with me, than happy for me.  I said “You could go.”  She did a double take and whirled on me, immediately listing all the reasons why she most certainly couldn’t go. I said, “Well, it is a choice. We all make choices and all these choices have effects on our lives. “

There’s nothing wrong with deciding to stay at home and be a mom and a wife in New Jersey, but it is such a downer when people start railing on how “lucky” you are when, in actuality, you made a choice and then another, and more choices,  because these choices are the most life giving, joy filled, exciting and eager-to-get-up-in-the-morning-for-things you could possibly create at this moment in time. I don’t want to be stuck justifying my choices to anyone, I want to be free to live, to enjoy, to find my passions and live them fully down to the very last day I have on this earth. There is a saying going around on the internet about rather than carefully creeping up to one’s old age, another choice is to come careening in, holding a spilled beer in one hand, and a winning hand of poker in the other, while cursing up a storm and laughing hysterically, with a bunch of friends at your side.  Somehow I like the latter image, returning to my Tomboy roots as I age, being like Idgie in Fried Green Tomatoes, aged in her 80’s selling honey at a warm southern hospitality roadside stand with her compatriots. And of course the honey is from the wildest of bees, which she still hand gathers on misty mornings, using her special bee-charming ways.  All in a place where wild bees still thrive and fulfill their place in Nature.  Although I did give up cursing on all except the worst of days quite awhile ago, I do like the image of a winning poker hand – implying that I am finally winning at this game we call life.

Yes, it really is all about choices. I am choosing to do what feels good and I’ve been doing it for awhile. I don’t always get it right, but that’s ok because as soon as you make one choice, if that was a mistake, there are 20 more choices waiting for your attentions. If I can only make the smallest increment that day toward feeling better, I take it. And if I can make a super leap into the trip of a lifetime, and it feels good to do so, then I do it. After that first decision, more choices come up at almost every moment to decide again to do what feels good.  I’ll keep making those decisions toward moving in the direction of my happinesses, making more real friends and finding freedom of spirit, for a start.

This is a picture of Lek Chailert, the founder of Elephant Nature Park in Thailand. Life can feel good while we are doing what we love! Make a choice to support her work  at www.elephantnaturepark.org 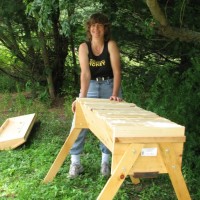 An information directory for animal communication